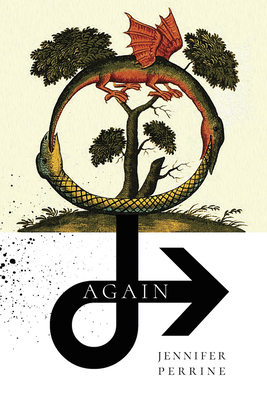 By Jennifer Perrine
$20.80
This is a special order and can be hard to get.

Poetry. Asian & Asian American Studies. LGBTQIA Studies. AGAIN riffs on common words--tremendous, terrific, disaster, wall, ban--that have been overused and misused in recent years, made to carry the weight of disturbing connotations. In poems that speak through both a collective voice and a singular, personal one, AGAIN maps the emotional territories of this specific--but not unique--moment in United States history. Jennifer Perrine's poems trace a path through this surreal landscape, illuminating a terrain of disorientation, grief, and shame at the America we have made. AGAIN is an anthem, a reckoning for the land of the smack that makes us see stars, home of the belt that stripes our backs. Drawing on allusions that range from nursery rhymes and folk tales to Simone de Beauvoir and The Wizard of Oz, the poems explore the nuances of each fraught word, recollecting its various meanings and resisting monolithic rhetoric. Through wordplay and wry wit, Again steals these words back, infusing the language once more / with feeling.

A fusion of the ageless and the dystopian, these compelling, first-person, allegorical narratives by Jennifer Perrine plunge us directly into the dark consequences of power and greed run amok, with more than a few hints that connect these poems to the United States of the late 2010s. Yet somehow, miraculously, these brilliant expos (c)s-in-metaphor are not just bearable, with their understated glimmers of strength, endurance, and nuanced hope. They are beautiful. The poet's language absolutely sings; even when the song is grim, it holds us up. Like a short story, this stunning book calls to be read in one sitting. In your hands is one of the best books of our time. I can't praise it enough.--Ingrid Wendt

The collective voice seems particularly hard to grasp at a time when our communities, country, and world deal so heavily in the currencies of isolation and fracture. But in AGAIN, Perrine uses that collective voice to offer us a poetic (and prophetic) antidote to the long tradition of American exceptionalism. While myth-making implies invention, particularly of the grandiose kind, myths also remind us of those core truths of love, fear, intolerance, and hope that we live our lives by. Perrine turns the bombastic on its head in these poems and gives us the myth of our country's current moment in a voice at once Greek chorus and intimate monologue, reminding us of the very shared humanity we cannot afford to ignore.--Keetje Kuipers

The tone of AGAIN is bleak, brutally satiric. Its voice is richly musical, deeply archetypal. And the combination is riveting. This collection's poet-Scheherazade resides in a house with 'boards nailed over every window / and door, no entrance, no way out.' But language does indeed give us a way to get out, a way to transcend. In this stunning indictment of American culture, the poet brings considerable talents to bear on making us achingly aware of the ingrained injustice in our society. Jennifer Perrine summons poetry's powerful devices to tell us the brutal truth.--Paulann Petersen, Oregon Poet Laureate Emerita

In AGAIN Jennifer Perrine deepens the rhetoric of idioms and presidential tweets, restoring adjectives like 'tremendous' and 'terrific' to complexity and nuance. Perrine looks both at what the individual self and individual words mean in a country that feels dystopian. These poems speak to the collective of a nation who is bearing a time full of disconnection and emotional hungers, but still 'among the most decent of sinners.' With these sensuous and often mythic makeovers, language shines again, even burns, but most importantly words start to mean again.--Traci Brimhall