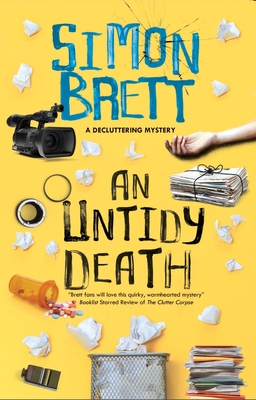 When the body of a prospective client is discovered in her burned-out home, declutterer Ellen Curtis is drawn into a baffling investigation where nothing is as it first appears. "My mother's going to kill herself . . . That is, if I don't kill her first." When Alexandra Richards approaches professional declutterer Ellen Curtis to ask her to help sort out her mother's chaotic flat, Ellen gets the impression Alexandra doesn't like her mother very much. But when Ingrid Richards' body is discovered in her burned-out home, Alexandra's exasperated words don't seem such a joke. Due to the hazardous state of the victim's over-cluttered residence, the police are inclined to dismiss her death as an unfortunate accident. Ellen's not so sure. Could Alexandra's resentment towards her mother have escalated into outright violence? The more she discovers about the dead woman's remarkable past, the more convinced Ellen becomes that there's something decidedly suspicious about her death. At least she can console herself that clearing out widower Edward Finch's bungalow will be a straightforward job in comparison. But in this assumption, Ellen couldn't be more wrong . . .