Toxic Legacy: How the Weedkiller Glyphosate Is Destroying Our Health and the Environment (Hardcover) 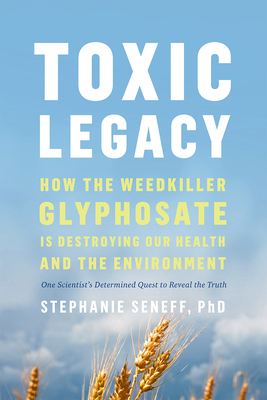 Toxic Legacy will stand shoulder to shoulder with Rachel Carson's Silent Spring. This is] unquestionably, one of the most important books of our time.--David Perlmutter, MD, #1 New York Times bestselling author of Grain Brain and Brain Wash

Urgent and eye-opening, the book serves as a loud-and-clear alarm.--The Boston Globe

A game-changer that we would be foolish to ignore.--Kirkus Reviews (starred)

From an MIT scientist, mounting evidence that the active ingredient in the world's most commonly used weedkiller is contributing to skyrocketing rates of chronic disease

Glyphosate is the active ingredient in Roundup, the most commonly used weedkiller in the world. Nearly 300 million pounds of glyphosate-based herbicide are sprayed on farms--and food--every year.

Agrochemical companies claim that glyphosate is safe for humans, animals, and the environment. But emerging scientific research on glyphosate's deadly disruption of the gut microbiome, its crippling effect on protein synthesis, and its impact on the body's ability to use and transport sulfur--not to mention several landmark legal cases-- tells a very different story.

Throughout Toxic Legacy readers will discover:

As Rachel Carson did with DDT in the 1960's, Stephanie Seneff sounds the alarm on glyphosate, giving you guidance on simple, powerful changes you can make right now and essential information you need to protect your health, your family's health, and the planet on which we all depend.

Stephanie Seneff is a senior research scientist at MIT's Computer Science and Artificial Intelligence Laboratory. She has a bachelor's degree in biology with a minor in food and nutrition, and a master's degree, an engineer's degree, and a PhD in electrical engineering and computer science, all from MIT. For most of her career at MIT she was involved in the development of technology to support natural human-computer communication through spoken language. Since 2010, Dr. Seneff has shifted her research focus toward the effects of drugs, toxic chemicals, and diet on human health and disease, and she has written and spoken extensively, articulating her view on these subjects. She has authored over three dozen peer-reviewed journal papers on topics relating human disease to nutritional deficiencies and toxic exposures. She has focused specifically on the herbicide glyphosate and the mineral sulfur. Dr. Seneff splits her time between Hawaii and Massachusetts.