A Dream Derailed: How the Left Highjacked Civil Rights to Create a Permanent Underclass (Paperback) 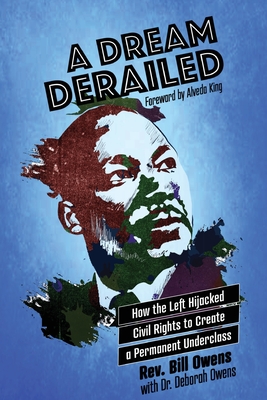 There was every reason to hope the struggle for civil rights would bring about greater freedom and independence for blacks in America. Yet today, we find that many black leaders have forgotten what inspired that struggle. Many of these leaders urge black Americans to look for inspiration from government and political agendas that undermine the moral fabric of the Church -- the same Church that guided the civil rights movement Abortion, same-sex marriage, and government encroachment -- which subverts religious liberty -- are now all proclaimed as "freedoms" by many black leaders. To be sure, the leaders of the civil rights movement saw these as evils and evidence of sin -- certainly not signs of freedom. Black Americans are at a crossroad of their own today -- in many ways, even more so than before the civil rights movement. Will we turn away from a life of dependence on government and political agendas and turn back to God and His plan for us?

Despite the successes of the civil rights movement -- during which African Americans peacefully protested to obtain basic human rights -- many blacks have forgotten the fact that it was their Church that was at the center of that movement, providing its moral conscience and foundation.