Death of a Gigolo (A Jaine Austen Mystery #17) (Mass Market) 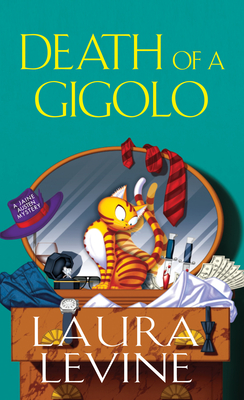 It's homicide on the funny side as freelance writer and long-time Ben & Jerry's addict Jaine Austen battles crime (and cellulite) on the mean streets of Beverly Hills!

Freelance writer Jaine Austen's life is suddenly full of romance. For one thing, she's reconnected with her ex--though her cat, Prozac, isn't happy about it. And Jaine's also got a new ghostwriting gig, working on a steamy novel called Fifty Shades of Turquoise...

Daisy Kincaid is in her sixties and heiress to a fortune. Now she wants to make a name for herself as a romance author...with a little help from Jaine, that is. As Jaine labors away on love scenes, she gets to know the wealthy woman's gentleman friend, her household staff, and her social circle--every one of whom is horrified when Daisy falls under the spell of a much younger stud named Tommy, a rude, crude lothario who's made himself a fixture in Daisy's Bel Air mansion.

After Tommy and Daisy shock everyone by announcing their engagement, it doesn't take long for someone to stab him in the neck--with the solid gold Swiss Army knife that Daisy gave him as a gift. But to narrow down the list of suspects, Jaine will have to put a bookmark in that love story--and focus all her creative talent into untangling a tale of money and murder...

Laura Levine is a comedy writer whose television credits include The Bob Newhart Show, Laverne & Shirley, The Love Boat, The Jeffersons, Three's Company, and Mary Hartman, Mary Hartman. Her work has been published in The Washington Post and The Los Angeles Times. She lives in Los Angeles, and is currently working on the next Jaine Austen mystery. Readers can reach her at Jaineausten@aol.com, or her website: www.JaineAustenMysteries.com.