Sing You Home: A Novel (Hardcover) 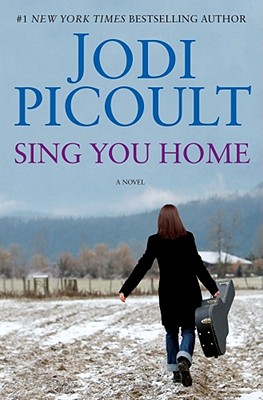 By Jodi Picoult
$28.00
This is a special order and can be hard to get.

“Sing You Home is another intense, eye-opening book from bestselling author Picoult. This time she tackles what it means to be a parent, what being gay in today's society entails, and the definition of 'family.' The reader cannot help but be moved by the story of Zoe Baxter, a music therapist, and her attempt to have a child.The book is packaged with a CD of original songs corresponding to specific chapters, and the reader is able to follow Zoe on her journey of self-discovery and her mission create a family.”
— Amanda Snow, Hooray for Books!, Alexandria, VA

From the award-winning, #1 New York Times bestselling author whom USA TODAY calls a “master of the page-turner,” comes the spectacular story of a woman’s complex quest to form a family.

Every life has a soundtrack. All you have to do is listen.

Music has set the tone for most of Zoe Baxter’s life. There’s the melody that reminds her of the summer she spent rubbing baby oil on her stomach in pursuit of the perfect tan. A dance beat that makes her think of using a fake ID to slip into a nightclub. A dirge that marked the years she spent trying to get pregnant.

In the aftermath of a series of personal tragedies, Zoe throws herself into her career as a music therapist. When an unexpected friendship slowly blossoms into love, she makes plans for a new life, but to her shock and inevitable rage, some people—even those she loves and trusts most—don’t want that to happen.

Sing You Home is about identity, love, marriage, and parenthood. It’s about people wanting to do the right thing for the greater good, even as they work to fulfill their own personal desires and dreams. And it’s about what happens when the outside world brutally calls into question the very thing closest to our hearts: family.

Jodi Picoult received an AB in creative writing from Princeton and a master’s degree in education from Harvard. The recipient of the 2003 New England Book Award for her entire body of work, she is the author of twenty-six novels, including the #1 New York Times bestsellers House Rules, Handle With Care, Change of Heart, and My Sister’s Keeper, for which she received the American Library Association’s Margaret Alexander Edwards Award. She lives in New Hampshire with her husband and three children. Visit her website at JodiPicoult.com.

“An immensely entertaining melodrama with crackerjack dialogue that kept me happily indoors for an entire weekend.” —USA Today

“[Jodi Picoult] has crafted another winner. . . Picoult cleverly examines the modern world of reproductive science, how best to nurture a child and what, exactly, being a family means.” —People

“Sing You Home is the book that we, as gay men and woman, will want to hand to our straight friends, neighbors, co-workers, and family members. I’m not saying Picoult is a savior for the gay movement, but she’s created a record of our time.” —Edge (Boston, Chicago, Atlanta, Miami, and Los Angeles)

“Picoult treats all sides of this complex morality tale with honesty and dignity, which is what readers have come to expect from her.” —St. Louis Post-Dispatch

“Determinedly life affirming, with designs on the heart.” —Newark Star-Ledger