Little Naturalist: Henry David Thoreau in the Woods (Board Books) 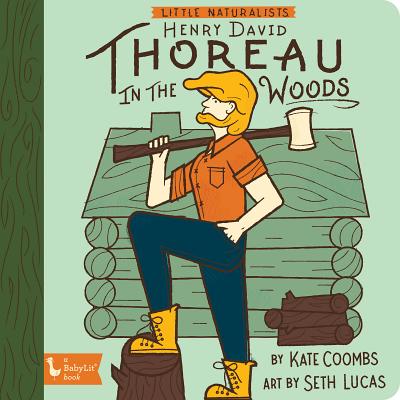 Introduce your baby to Henry David Thoreau, his time at Walden Pond, and how he enjoyed living in the woods.

Henry David Thoreau was an American author, poet, historian, and philosopher. Millions of people have read his writings, and a favorite of many is Walden, the story of the year he spent gardening, whittling, and walking in the woods around his tiny house Walden Pond. Thoreau still influences people today, and is considered extremely important to the environmentalist movement. Kate Coombs' enchanting poem and Seth Lucas' adorable illustrations share Thoreau's experiences with the next generation of little nature-lovers, fostering a life-long appreciation of the world around them while learning to Be Creative, Be Brilliant, and Be Yourself.

Kate Coombs is an award-winning author of original fairy tales, poems, middle-grade fantasy novels, and picture books, including the critically acclaimed Water Sings Blue, which won the Lee Benney Hopkins Poetry Award for 2012, and seven books in the bestselling BabyLit series. She lives in Bountiful, Utah.

Seth Lucas is an illustrator and designer with a BFA in graphic design. He is the co-creator of Ello There Outdoors selling prints and accessories supporting the National Parks and outdoors. He lives in Indianapolis, IN, with his wife and daughter.