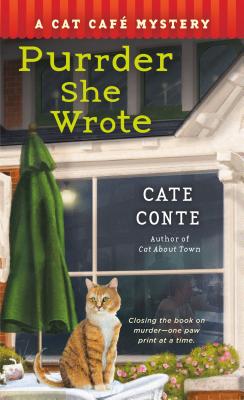 Purrder She Wrote is second in the pawsitively charming new feline mystery series from Cate Conte set off the New England coast, where curiosity leads to some killer small-town secrets....

It’s the grand opening of Daybreak Island’s cat café, where customers can get cozy with an assortment of friendly felines—and maybe even take one or a few home. Co-owner Maddie James is purring with excitement over her new warm-and-fuzzy venture. . .until she becomes entangled in a petty drama between one of her volunteers, an ardent animal-rights activist, and a wealthy woman who insists on adopting a calico kitty—right this instant. The catfight that ensues is bad enough for business. But when the snubbed socialite is found dead with a tell-tale catnip toy on the scene, suspicion lands squarely on Maddie’s staffer. Now, with her reputation and her career prospects on the line (to say nothing of her budding romance with a handsome pet groomer) Maddie must do whatever it takes to solve the crime—before her nine lives are up.

Cate Conte writes the Cat Cafe Mysteries and the new Full Moon Mysteries. As Liz Mugavero, she writes the Pawsitively Organic Mysteries, the first of which was an Agatha Award nominee for Best First Novel. She lives in Connecticut with her rescue pals.