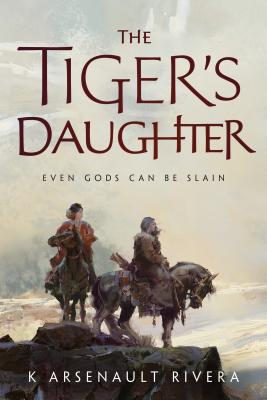 “Badass ladies slaying demons, defying conventions, and saving the world on their own terms? Count me in. The Tiger's Daughter is an honest-to-goodness sweeping epic fantasy unlike any I have read. I don't remember ever being so excited for a new series. The characters in this story are so fully realized, the landscapes so vivid, I didn't even realize I'd been so swept away until I turned the last page. I endured with O Shizuka, princess, the divine made flesh, and finest blade in all Hokkaro; I raged with Barsalai Shefali Alsharyaa, demon slayer, horse whisperer, and infamous Qorin warrior. I didn't want to leave them, and I can't wait for the next installment.”
— Heather Weldon, Changing Hands Bookstore, Tempe, AZ

Even gods can be slain

The Hokkaran empire has conquered every land within their bold reach—but failed to notice a lurking darkness festering within the people. Now, their border walls begin to crumble, and villages fall to demons swarming out of the forests.

Away on the silver steppes, the remaining tribes of nomadic Qorin retreat and protect their own, having bartered a treaty with the empire, exchanging inheritance through the dynasties. It is up to two young warriors, raised together across borders since their prophesied birth, to save the world from the encroaching demons.

This is the story of an infamous Qorin warrior, Barsalayaa Shefali, a spoiled divine warrior empress, O Shizuka, and a power that can reach through time and space to save a land from a truly insidious evil.

A crack in the wall heralds the end…two goddesses arm themselves…K Arsenault Rivera's The Tiger’s Daughter is an adventure for the ages.

K Arsenault Rivera was born in Mayaguez, Puerto Rico, but moved to New York when she was a toddler. When not managing a nutritional supplement store in Brooklyn, K is an avid participant in the roleplaying community, from which she drew inspiration for her debut novel, The Tiger’s Daughter. She currently lives in Brooklyn with her partner.

Praise for The Tiger's Daughter

"K Arsenault Rivera turns many of the standard conventions of fantasy on their heads....A love letter... lavishly chronicling how two women fall in love.... thoughtfully rendered and palpably felt." — The Washington Post

"The Tiger’s Daughter sinks its claws into a reader and refuses to let them go until the very last page...As a word, ambitious sums up this debut." —Culturess

“The epistolary tale at the heart of The Tiger’s Daughter unfolds with deceptive elegance, leading the reader to a conclusion at once unexpected, touching, and apt.” —Jacqueline Carey, author of the bestselling Kushiel's Legacy series

"A layered and mesmerizing tale of love and legends, this fierce story will settle in your bones like a chill and leave your heart aching.” —Roshani Chokshi, New York Times bestselling author of The Star-Touched Queen