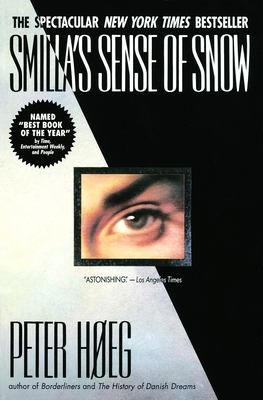 She thinks more highly of snow and ice than she does of love.  She lives in a world of numbers, science and memories--a dark, exotic stranger in a strange land.  And now Smilla Jaspersen is convinced she has uncovered a shattering crime...

It happened in the Copenhagen snow.  A six-year-old boy, a Greenlander like Smilla, fell to his death from the top of his apartment building.  While the boy's body is still warm, the police pronounce his death an accident.  But Smilla knows her young neighbor didn't fall from the roof on his own.  Soon she is following a path of clues as clear to her as footsteps in the snow.  For her dead neighbor, and for herself, she must embark on a harrowing journey of lies, revelation and violence that will take her back to the world of ice and snow from which she comes, where an explosive secret waits beneath the ice....

Peter Høeg is an internationally renowned Danish author who entered the North American literary scene with Smilla's Sense of Snow. Since its publication, Høeg's new works, such as The Woman and the Ape - have appeared in English translations alongside older works such as Tales of the Night. Once a sailor, and currently an actor and dancer as well as a writer, Høeg lives in Copenhagen.